As we told you first and exclusively last week ‘Will #viscomdus See DV Signage Europe Not DiME?‘ DV-Signage Europe GmbH has now been officially launched as the new pan-European sales-base for all Digital View media players, displays and signage products. 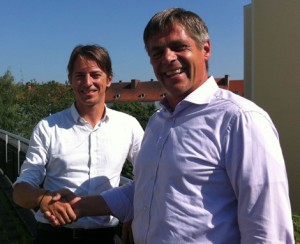 Digital View launched the Signage Division under Bob Michaels in North America in early 2011 and the launch of DV-Signage Europe GmbH marks an important step in the development of its European sales channels.

The new company will offer sales, support and servicing for the entire DV-Signage product range; from media players and software, to its specialist high performance media displays.

Bob Michaels, President of DV-Signage Inc. told us “Digital View has been recognized around the world as a leading signage player in the retail media, museum and digital out-of-home sectors,”

He added “DV-Signage builds on that excellence and Europe is a key market for the company. We are extremely excited in having built such a strong team and Munich provides a great base from which we can support customers all over the continent.”

DV-Signage Europe GmbH will be managed by the joint team of Richard Cobbold and Florian Goebel.

This entry was posted on Monday, October 3rd, 2011 at 19:03 @836 and is filed under DailyDOOH Update. You can follow any responses to this entry through the RSS 2.0 feed. You can leave a response, or trackback from your own site.