Futuramedia has been following the Rugby World Cup since September. From the beginning of the tournament, the company has been displaying results and announcing upcoming games on both its Malls and Pharmacy networks. The company’s in-house graphic department supplied the 3D animations used to trail the announcements. 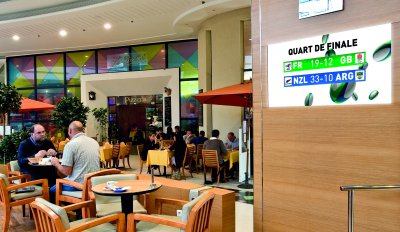 50 million hopeful French people will have seen the campaign by the end of this week, when the All Blacks put an end to it all…

This entry was posted on Monday, October 17th, 2011 at 11:18 @513 and is filed under DailyDOOH Update. You can follow any responses to this entry through the RSS 2.0 feed. You can leave a response, or trackback from your own site.