Garry McGuire, CEO of Reach Media Group (RMG Networks) says his company has moved from a digital screen network to a marketing solutions company and now might be called an analytics company. 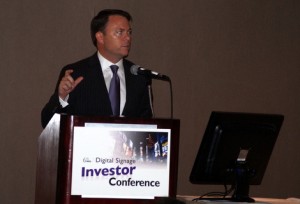 Showing how his firm’s revenue stream is often coming as much or more from CPAs (cost per activations) than CPMs (cost per thousands), McGuire gave numerous examples and case histories showing this, usually in collaboration with one of six partner companies (among them Monster Media, LocaModa, Blue Bite and Kinetic Worldwide).

Building on the social/mobile/local media integration that he announced back at the Customer Engagement Technology World in San Francisco last spring, McGuire said that consumers are addicted to the digital world, now basically carrying it in their pocket.

“This is the era of activation,” said McGuire. “The evolution is being seen in activation media, allowing change in dayparts, in couponing, in Near Field Communications, in geotargeting. And we’re seeing it in all environments. Advertisers, agencies and consumers have more choice for activation than ever before.

“Advertisers are realizing that they need digital place-based media because they see that it drives customer engagement. For networks with scale it’s becoming a ‘must’ buy. And increased inventory will attract investors.”

One of the case histories that McGuire discussed dealt with the Monterey Bay Aquarium which tried to get people to buy membership instead of just buying a ticket . Using a combination of digital signage, mobile and a game (posted to Facebook), the Aquarium sold 9,800 memberships in 30 days.

Another example involved NFC. McGuire said that 8,500 of RMG screens are equipped with NFC tags and these and others are also equipped for texting and QR codes for those phones not equipped for NFC. A successful campaign, with which RMG partnered with Blue Bite, was for Hotels.com.

“Social media has taken off so much now that we are often running a bumper at the end of many camnpaigns invites people to engage,” McGuire said.

A storefront campaign involved the Academy Awards, run in partnership with MonsterMedia. The interactive campaign resulted 1 mllion people participating. And a campaign for Porsche brought 10,000 people to test the automobile – about of them were serious buyers.

McGuire announced that his company has partnered with Direct TV which is developing a digital signage product with RMG technology that will be seen in 2012.

“Partnering and layering will make your network more valuable,” he said. “And involving social-mobile-local can give you a second revenue stream.”

This entry was posted on Monday, October 17th, 2011 at 18:50 @826 and is filed under DailyDOOH Update. You can follow any responses to this entry through the RSS 2.0 feed. You can leave a response, or trackback from your own site.