Have A Wicked Halloween

Surprisingly with only 10 days to go until Halloween we haven’t seen that many Halloween themed campaigns. One that we have noticed, it’s hard not to notice a campaign at Euston these days what with JCDecaux’s impressive recently rolled out digital e-motion effectively wrapping the station concourse, was this one for WICKED, the musical. 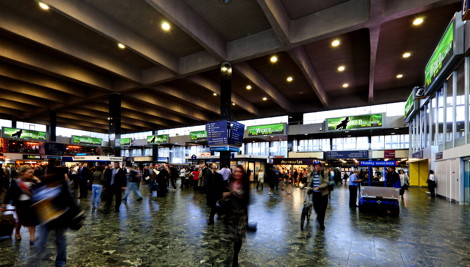 Dewynters, the theatrical promotions agency has booked the two-week campaign on JCDecaux’s e-motion digital screens, surrounding commuters on three sides of the concourse in the approach to Halloween.

The campaign is running during the key October period – targeting audiences during the school half-term and the Halloween season.

With the strapline, ’Have a WICKED Halloween’ and moving creative across the 9 e-motion screens, the campaign brings a panoramic experience of the musical to Euston (Dewynters by the way also booked the new Digital Escalator Panels at Euston station).

WICKED of course tells the untold story of the Witches of Oz and has now reached its landmark 5th birthday at London’s Apollo Victoria Theatre – 8 minutes away from Euston station via tube to Victoria.

The 6m x 1.6m landscape LCD e-motion screens provide consumers with a ‘wrap-around’ experience across all 9 screens and enable the campaign to reach 195,000 people a day.

This entry was posted on Sunday, October 23rd, 2011 at 13:09 @589 and is filed under DailyDOOH Update. You can follow any responses to this entry through the RSS 2.0 feed. You can leave a response, or trackback from your own site.