“The Digital Signage Investment Conference, in my opinion, is the major event of the next three to five years where true leaders in the DOOH space will emerge,” says Benjamin Mathieu, enVu CEO. 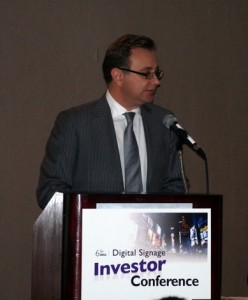 He added “As discussions evolve into media and business model efficiencies, enVu will maintain a key role within the industry by helping agencies maximize their DOOH investments.”

Industry-leading media company enVu based in New York City (and a wholly-owned subsidiary of STRATACACHE) issued a press release earlier today reinforcing the fact that the 2011 Digital Signage Investor Conference was the place to be to learn how to attain a profitable future in the digital out-of-home (DOOH) space (the event covered revenue models, exit strategies, financing, fundraising and metrics and of course there was the story about the man rescuing the dog).

The press release mainly focusses on the session ‘Creating a Profitable Business via Subscription, Merchandising and Ad-Based Models‘ which was named a big success by show attendees.

Included on that panel was Benjamin Mathieu, CEO of enVu, who shared his checklist of key factors needed to successfully build a DOOH media company.

Key takeaways from his presentation were: –

This entry was posted on Thursday, October 27th, 2011 at 07:02 @335 and is filed under DailyDOOH Update. You can follow any responses to this entry through the RSS 2.0 feed. You can leave a response, or trackback from your own site.