“It used to cost us $1,000 every time we had to change our static posters,” says Jonathan Fornaci, president and CEO, Straw Hat Pizza, San Leandro, California. “By putting in our digital menu boards, they paid for themselves right away. We can change them as often as we want, even hourly. And there are many more benefits as well.” 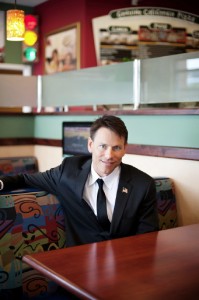 Straw Hat Pizza is a chain of 88 fast food stores, either Straw Hat Pizza or Straw Hat Grill, the latter with a more extensive menu. The company, centred largely in California, is now opening approximately two stores a month, extending into, Fornaci says, “Texas, Virginia and Montana, our hottest markets at the moment. In fact, a franchise opened this year in Billings, Montana, has become Straw Hat’s #1 highest gross revenue producer among all franchisees.”

It wasn’t always the case. Founded in 1959, by 1969 Straw Hat encompassed 450 stores headed by the Mariott Hotel group. But most were bought by Pizza Hut in the mid-1980’s. About 50 of the franchisees stayed on their own, falling to 38 before starting to build again.

“In the last three years, we’ve grown 300% in terms of both stores and revenue,” says Fornaci, who moved in as president from a career in as CIO and CTO in several technology and global security firms, lastly working for Atomic Tangerine.

Straw Hat outlets are all sit-down restaurants, targeting families, and offering all pizzas, pastas, hamburgers, appetizers, salads, and, in the case of the grills, a daily grill meal. Ingredients are organic and natural, with the company even having its own wheat fields in Ohio. Each restaurant has about 15 TV screens, large ones showing sports and family programming, while individual booths have their own small individual screens, “so kids can watch while the parents can have a conversation,” says Fornaci. 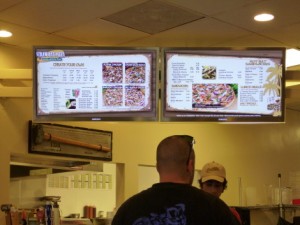 The networked digital boards enable store managers to change displays without sacrificing control by corporate. Among the most dramatic capabilities is the ability to run full motion video, such as the latest company commercials.

Easy to implement, the screens alert customers to newest items and the high-res images are much more effective for selling, increasing sales 20% to 30%.

Since Straw Hat outlets are geared for families, store managers love the ability to put custom messages for children celebrating birthdays, for example. 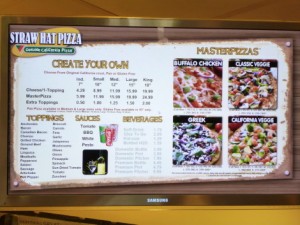 Fornaci says the advantages over the old static signage include the speed at which changes can be made; the flexibility to use multiple media, not just text; ease os use (with plug-and-play PCs; control (capabilities at store level do not allow managers to go outside of corporate guidelines); consistency, with every store looking the same; and cost.

“The screens show the products in a much better light than static signage,” says Fornaci. “The brightly coloured digital images are great for customers for whom English is not their first language. The can just see what they like and point.

“We’re very pleased with the advantages we’ve gained by choosing Four Winds Interactive, and are putting the digital screens in all our new restaurants as they open.”

This entry was posted on Wednesday, November 2nd, 2011 at 10:00 @458 and is filed under DailyDOOH Update. You can follow any responses to this entry through the RSS 2.0 feed. You can leave a response, or trackback from your own site.