The UK’s Channel 4 television station is to bring its distinctive news and commentary to live cross track projector screens (XTPs) on the London Underground network, as part of a marketing push for its flagship 7pm Channel 4 News bulletin. 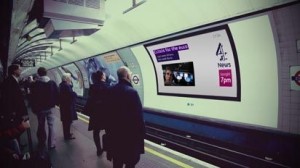 The marketing campaign is somewhat of a media first for Channel 4, and aims to drive viewers to the 7pm Channel 4 News broadcast, by highlighting and updating key headlines that will feature on the show that night on the XTPs during the busy commuter hours.

The content will showcase the top stories that will feature on that evening’s bulletin, combined with tweets and blogs from the Channel 4 News presenters Jon Snow, Krishnan Guru-Murthy, Cathy Newman and Matt Frei.

The objective is obviously to give commuters the big stories with a shot of the personality and character associated with Channel 4 News, in a way that will drive people to the programme.

The technology, developed by digital creative agency The Cloud and Compass working with 4Creative and Rudd Studio, will allow C4 and ITN to automatically publish dynamic copy and content throughout the day, a facility that was previously unavailable to other advertisers without significant human input. The ITN news team will provide content directly related to that evening’s bulletin, from 4-7pm, to drive viewers to the 7pm programme.

The campaign, planned by OMD and bought by Posterscope, will run for four weeks from November 14th, across 100 XTP sites on the London Underground Network.

This entry was posted on Friday, November 11th, 2011 at 09:27 @435 and is filed under DailyDOOH Update. You can follow any responses to this entry through the RSS 2.0 feed. You can leave a response, or trackback from your own site.