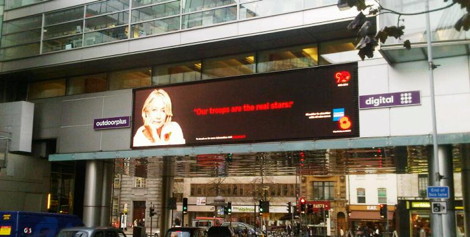 According to Maisie McCabe over on Brand Republic (in an article that was first published on campaignlive.co.uk) the displays were all part of a wider outdoor campaign to support the Royal British Legion’s Poppy Appeal.

The campaign was planned by Media Square agency CST The Gate and Kinetic Worldwide. Space was donated by the media owners.

This entry was posted on Monday, November 14th, 2011 at 07:37 @359 and is filed under DailyDOOH Update. You can follow any responses to this entry through the RSS 2.0 feed. You can leave a response, or trackback from your own site.