We have heard lots of anecdotal evidence that New York’s Customer Engagement Technology World a few weeks back was a very successful event. In terms of numbers it definitely was… 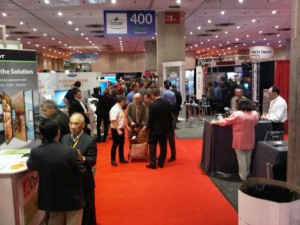 #CETW day one (one hour in)

Lawrence Dvorchik, tells us that there were about 2,800 pre-qualified and verified non-exhibitors. This is up 33% from last year’s event.

That of course is only two weeks after #dse2012 being held, as usual in Las Vegas (although slightly later in 2012 than in previous years, it’s the 6th – 9th March in 2012 whereas it’s usually in February). Whilst Lawrence and others involved with #CETW will tell you that “their audience is different” that clash of dates doesn’t (to us at least) make any sense whatsoever.

I think it’s safe (and fair to say) that #CETW in San Francisco last time around (in 2011 it was it’s first year in Frisco having been held in previous years in Las Vegas in the April timeframe) was having (almost) to get itself going again from a standing start (name change plus venue change).

What will be really interesting come March 2012 is how many of the stalwart Digital ScreenMedia Association members (#CETW is the official DSA show of course) exhibit at (a) both or (b) only one or the other.

Our betting is that those DSA members who are predominantly digital signage related will be exhibiting at #dse2012 and the ‘other’ kiosk and inkjet printer folks will be at #CETW.

Now that might seem like a simple (and very unfair) generalisation but I bet you that we are not close off the mark.

Does the #CETW brand need to consist of both an East coast and West coast event (in the same year)? The organisers will tell you that it does though we think that many in the industry would argue that it doesn’t.

This entry was posted on Sunday, November 20th, 2011 at 15:00 @667 and is filed under DailyDOOH Update. You can follow any responses to this entry through the RSS 2.0 feed. You can leave a response, or trackback from your own site.

One Response to “#CETW Post-Event Numbers”