Some of the key findings of the report included: 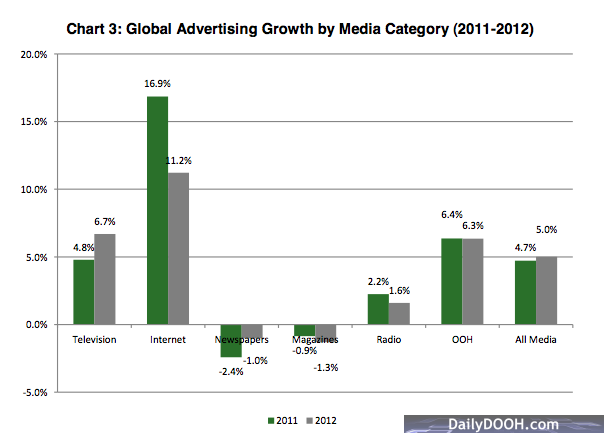 MagnaGlobal monitors the revenue of media suppliers in every major market, 63 in all, representing 95% of the world’s economy. It includes media suppliers in television (pay and free), Internet (search, display, video, mobile), newspapers, magazines, radio, cinema and out-of-home (traditional and digital). It excludes direct marketing categories such as direct mail or traditional “yellow page” directories. For a more in-depth analysis visit: www.magnaglobal.com

MagnaGlobal forecasts are the industry’s leading source for measuring and forecasting the growth of advertising revenues for media companies. Their next global forecast update will be published in June 2012. Until then follow @MAGNAGLOBAL on Twitter.

This entry was posted on Monday, December 12th, 2011 at 18:36 @816 and is filed under Scuttlebut. You can follow any responses to this entry through the RSS 2.0 feed. You can leave a response, or trackback from your own site.