Philips Public Signage and Advantech Europe will be launching their Open Pluggable Specification (OPS) digital signage products at this year’s ISE (Amsterdam Jan 31st- Feb 2nd). The companies will have a special reduced price sales promotion at the show. 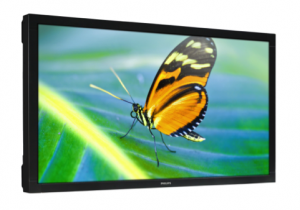 MMD (Multimedia Displays), a wholly owned company of TPV and the exclusive marketer and reseller for Philips-branded LCD monitors and public signage displays worldwide, released the 42” BDL4245E, 46” BDL4645E and both 55” models – BDL5545E and BDL5545ET – come equipped with an OPS slot which allow for the simple integration of an Open Pluggable Specification module, an industry standard interface being adopted within the digital signage market for the combination of a PC module and display.

The displays also feature additional user interactions such as integrated optical IR multi-touch screen (BDL5545ET), One Wire allowing the user to not only send video and audio from the media player to the display, but all control and configuration commands as well, all via one single HDMI cable (both 55” models), and all five new models have full HD panels for crystal clear images and video, as well as a wide viewing angle and offer central configuration via RS232, ensuring simple control and configuration of all displays within the network. 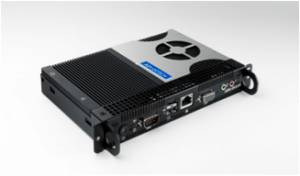 The ARK-DS220 is compliant with the Philips E-series displays that come equipped with an OPS slot.

This entry was posted on Thursday, January 12th, 2012 at 10:00 @458 and is filed under DailyDOOH Update. You can follow any responses to this entry through the RSS 2.0 feed. You can leave a response, or trackback from your own site.