On Monday at the #AOpenForum we saw Steven Platt and he was at #ISE2012 on Tuesday and Wednesday teaching some classes. On Monday also, OVAB President Dirk Huelsermann was noticeable by his absence at Monday’s incredibly awful #DiSCO12 event but he was on fine form Tuesday on the NEC booth and associated VUKUNET press briefings. 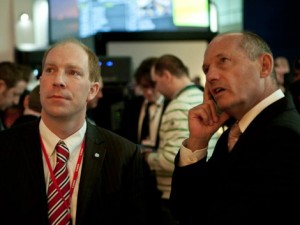 On Wednesday we noted that Scala’s Tom Nix was on the (seemingly) always busy Scala booth and it great also to see Gerard Bucas (now ex-Scala CEO of course but still on their board).

#ScreenmediaExpo‘s Mark Pigou was spotted in a number of halls talking to tons of people though we didn’t have chance to talk with him ourselves. Looks also like Ayuda Media Systems have recruited more folks in Europe, spotted with Madalyn Roker was a beautiful young lady who we understand has the very glamourous name of Ekrame El Idrissi.

We also bumped into (ex Avanti Screenmedia) Stuart Chambers who is now working for an Abu Dhabi media company and is all set to move to the region in the next couple of weeks.

From the fashion content world we saw Flixio’s Kirk VanderLeest (all the way over from Oregon) as well as the Amigo Digital owners Alex Hughes and Chris Shields.

On Thursday y’all should know that Mr Stephen Nesbit was in town – having hopped over the ‘pond’ from Texas. We also spotted Hiperwall CEO Jeff Greenberg, all the way from California on the NEC stand (there’s a video interview with him as well up on the NEC Facebook page). We also saw The Imperative Group’s Chris Heap and Dynamax’s Howard Smith. 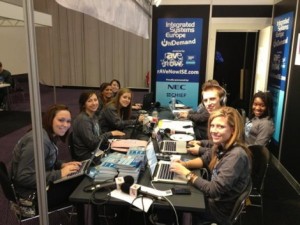 The rAVe NOW crew 'We are all over 18 and we can prove it!' Photograph copyright: rAVePubs

This week Amsterdam has seen a real ‘celebrity’ at the show, in the shape of Ron Dennis CBE (shown in the picture above on the right) who we spotted on the Christie stand (he’s obviously following the DailyDOOH team about as the last time we met it was in First Class on our famous BA flight to Los Angeles with David Beckham and his kids when we flew over for #CES – or perhaps he was on his way to #CES as well, who knows!).

Lastly we are told that there’s no truth in the rumour which spread via @AVMag’s twitter feed, we quote “1st sighting of Rave’s 15-strong press army. The oldest of the group is about 16 & they’re filming video pieces on a mobile phone” – the young girl in question must be at least 18 years old because on Tuesday night in Dam Square we saw her being bought a drink by a strange man!

This entry was posted on Thursday, February 2nd, 2012 at 11:17 @512 and is filed under DailyDOOH Update. You can follow any responses to this entry through the RSS 2.0 feed. You can leave a response, or trackback from your own site.