Barco LiveDots, a Barco company we have NEVER heard of, tells us that it has expanded its LED product range with Digital City Posters, 10 mm pixel pitch digital Out-of-Home billboards that integrate media player, remote monitoring software and display housing. 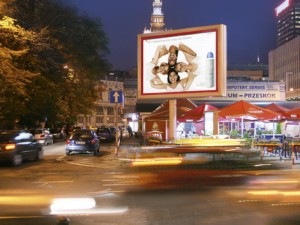 The press release (press releases in their very nature are perhaps ALWAYS arrogant), states that, and we quote “With the introduction of these new billboards, Barco LiveDots strengthens its position in the outdoor digital signage market”

‘Strengthens’? Umm well, whilst we’ve heard of Barco we have never heard of you Mademoiselle LiveDots.

Bas van Heek, Product Manager at Barco LiveDots was quoted as saying “Our new Digital City Posters are the next generation billboards for urban areas as they cover the whole segment between 6 and 10 m² face sizes,”

He continues “The new product enables Out-of-Home companies to convert their conventional TriVision and scrolling billboard install base into digital, which increases their operational efficiency. In this way, they open up new communication possibilities for advertisers.”

The announcement says that the Digital City Posters are a direct derivative of the modular TF-10 LED tile, which has already proven its worth with installations by leading outdoor media companies such as Outdoor Plus and Primesight.

As a fully integrated LED solution, the Digital City Posters incorporate a digital media processor, remote management and content management software, and an ambient environment controller into its screen housing.

To bring the Digital City Posters to the market, Barco LiveDots is partnering with dZine, another Barco company of course and Adboard (another company we never heard of), a provider of advertising products for Out-of-Home applications.

This entry was posted on Tuesday, January 31st, 2012 at 19:17 @845 and is filed under DailyDOOH Update. You can follow any responses to this entry through the RSS 2.0 feed. You can leave a response, or trackback from your own site.