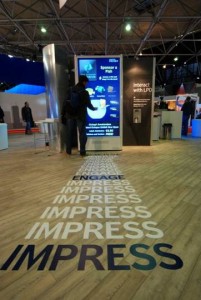 In a press release received today, Roger Hajjar, Prysm’s Founder and Chief Technology Officer was quoted as saying “The new Close Proximity and Broadcast Panels were designed to provide users optimal viewing at arm’s length, stunning image quality and consistent brightness and colour throughout the entire video wall to ensure a uniform, crisp image from any angle and at any level of camera zoom.”

“The panels have been specifically designed for performance in lighting situations used in broadcast studios, as the panels eliminate moiré patterns and ensure skin tones are portrayed accurately and in line with the presenters in the studio.”

No news though on what runs the touch or the gesture 🙁

This entry was posted on Tuesday, February 7th, 2012 at 18:50 @826 and is filed under Scuttlebut. You can follow any responses to this entry through the RSS 2.0 feed. You can leave a response, or trackback from your own site.