The AOpen Forum 2012 started the week before last off (Monday 30 January) with the event labelled as ‘Bringing Digital Signage Business Together‘ with 118 digital signage experts, resellers, integrators and partners.

The #AOpenForum attendance grew 25% compared to last year while #ISE2012 that took place from 31 January to 2 February hit an attendee increase of just over 17%.

Together with partners such as Intel, BlueFox, Broadsign, Net Display Systems, Online Software, Philips, Vision Robotics and Windows Embedded the program of the day was educative and inspiring and made up by far the most successful (now in its third year) AOpen Forum 2012. 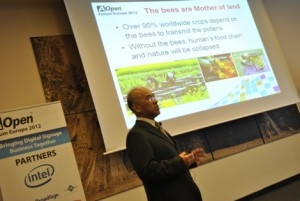 The bees are mother of land

In his speech he highlighted the importance of partnerships and cooperation underlining the theme of the day ‘Bringing Digital Signage Business Together‘. Sam Bellamy, Channel Sales Manager Europe from Intel then took the stage to provide a detailed view of channel opportunities and introduced new concepts that Intel is looking to deliver in close cooperation with AOpen in Europe.

Guest speaker Adrian Cotterill, Co-Founder and Editor-in-Chief DailyDOOH talked about his perspective on the future of Digital Signage including a look back at 2011. His ideas gave the audience some food for thought.

During one of the last sessions the AOpen Forum sponsors were invited to sit in the Ask the Expert Panel which was led by Adrian Cotterill. The session sparked a lively, cordial debate amongst the panelists. Afterwards the audience was really enthusiastic with this approach.

The conference concluded with the AOpen Best Project Award handed out to System Integrator Magit in Poland, who is leading a project for the ING bank in Poland across 450 branches including 520 AOpen Digital Engines. They have finished with the first 70 branches and installed an interactive terminal, a kid’s corner with touch displays, a video wall and audio per branch location. Overall a good innovative project that was rewarded with the AOpen Best Project Award.

Last but not least the day ended with drinks and dinner and a lot of networking. Feedback from our customers was really positive saying that they especially enjoyed the agenda which was educative and therefore useful. Adrian Cotterill concluded that the event was “Damned successful and a great deal of fun”. 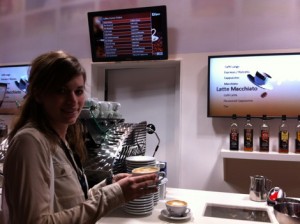 #ISE2012 started on Tuesday and lasted three full days. Even though Amsterdam was experiencing the coldest weather in centuries: ISE still managed to break all records of attendance. AOpen being represented in the Digital Signage Hall 10 on booth 10N129.

AOpen sketched a real-life hospitality/retail environment scenario of a coffee shop. Visitors could order their cup of coffee or tea at the order kiosk and pick up their order at the barista. The visitors name and order choice appeared at the pick up desk, so the barista knew what to make and serve. Although AOpen did not have the biggest booth: it sure was the busiest and most visited one in the area because of the coffee shop setup and the good coffee! AOpen showed visitors the possibilities of the beautiful and powerful products, powered by AOpen Digital Engine media players and the new WarmTouch touch-display series with integrated PC technology.

According to Alexander Pivovarov, CEO of Adissy a value added distributor of AOpen in Russia “We live in a very exciting time of global digitalization. The digital signage and DOOH markets are growing rapidly and the ISE 2012 was perfect proof of that. To keep such pace it’s important not only to rely on reliable components like AOpen’s digital engines, it’s also important to be in the center of the digital whirlpool. At ISE this center was at AOpen’s booth, very crowded with new and existing customers and partners and providing very warm and friendly atmosphere for business talks.”

This entry was posted on Tuesday, February 7th, 2012 at 15:32 @689 and is filed under Scuttlebut. You can follow any responses to this entry through the RSS 2.0 feed. You can leave a response, or trackback from your own site.