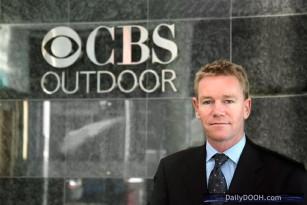 CBS Outdoor today announced a New International Management Structure – it doesn’t make any specific mention of how its digital initiatives fit in the new international division but CBS Outdoor have made no secret of their desire to be the leader in DOOH.

Pictured above is Clive Punter, CEO.

CBS Outdoor today announces a major restructure in its International division. In a move designed to spur revenue growth through organic and new market development, the company is creating an International Central Executive team including a Development team, tasked with expanding the business into new territories and developing contracts. The new structure also simplifies management in the company’s continental European markets.

The International Central Executive team will consist of several positions including Chief Development Officer, Chief Marketing Officer, International HR Director, and International CFO, all of whom will report directly to Chief Executive Officer, Clive Punter. The Development team is to be led with immediate effect by Antonio Alonso, previously general manager of the Spanish business, who takes up the title of Chief Development Officer. He will be supported by development directors Mike Baker, Mark Pettler and Philip Brown, who join from the European, UK and Ireland teams respectively and together bring substantial expertise on the commercial, product and franchise side. Catherine Gale joins as Chief Marketing Officer, and is tasked with refining and developing a more consistent approach to CBS Outdoor’s marketing and communication. Richard Eastmond takes on the role of International HR Director focussed on harnessing the power of the company’s people and resources. CBS Outdoor is also actively seeking an International CFO.

In a related move, Clive Punter is appointing three new managing directors in continental Europe, all of whom will be his direct reports. They are:

In other markets, the structure remains as is: Francois Moriniere, MD in France and Kendy Chiu, MD in China. Colin Leahy, MD in Ireland, will continue to report to Andrew Oldham, COO for the UK and Ireland.

“Outdoor continues to be one of our great success stories at CBS,” said Leslie Moonves, President and CEO, CBS Corporation. “As we invest in the business, it’s important to have the optimal management structure that allows us to grow our position both in emerging markets, and in those where we already operate. I look forward to the continued contributions of Clive and his team with this new organization.”

CEO Clive Punter says: “This is the culmination of significant planning and thinking since taking the role as CEO. I am tasking the Development team with significantly growing the size of the business over 5 years, on the back of forecasts showing that outdoor’s growth will outpace other traditional media and make it the stand-out performer over the next 3-5 years. The simplified reporting lines will shorten the lines of communications and bring me closer to the business, which means I can support the local MD’s better. It also provides greater clarity of responsibility for country performance.”

This entry was posted on Friday, December 7th, 2007 at 11:58 @540 and is filed under Scuttlebut. You can follow any responses to this entry through the RSS 2.0 feed. You can leave a response, or trackback from your own site.