I am sure a creative will tell us why this Nokia commercial looks great on TV but rubbish (in our humble opinion) on posters and billboards (is it a combination of colours or just the horizontal stripes or is it just us?).

We have seen it on a digital billboard at BAA LHR T5 (Nokia’s own giant LEDs there) and it didn’t look good there either. 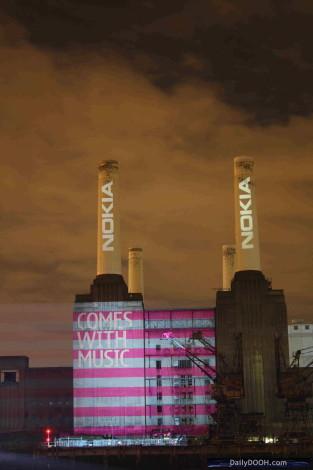 Outdoors though this is definitely the best we have seen the Nokia creative look (again, why is that? Is it cos’ it’s large?).

Anyway here we see a giant projection on Battersea Power Station, London by the folks at the Ministry of Experience.

The creative agency was W&K and this was booked by Luicinda Johnson and Nicola Rust of MediaCom.

The campaign started this evening (Monday 8th December) and was the launch projection in what is going to be first of many locations to be projected over the next 14 nights.

We also believe that there will soon be some 42″ touchscreen tables (designed for outdoor use) that will be used a little later on during the campaign,

This entry was posted on Monday, December 8th, 2008 at 21:22 @932 and is filed under DailyDOOH Update. You can follow any responses to this entry through the RSS 2.0 feed. You can leave a response, or trackback from your own site.