A huge crowd gathered to listen to John Underkoffler’s keynote at #dse2012 entitled ‘In, Through and Beyond: A Pixel Dialogue‘ 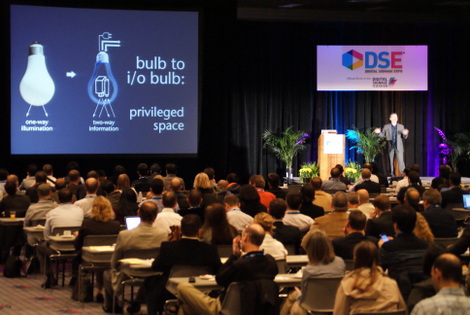 Prepare for lots of Minority Report references (though if there is one man who can legitimately quote them it is John Underkoffler). John Underkoffler is founder and chief scientist of Los Angeles-based Oblong Industries, developer of the g-speak Spatial Operating Environment. Previously, during 15 years at MIT’s Media Laboratory, he was responsible for innovations in optical and electronic holography, novel animation systems, several large-scale visualization techniques, and the I/O Bulb and Luminous Room systems.

The human-machine interfaces he’s devised over the past three decades remain widely influential. Interstitially, he has been science and technology adviser to numerous films, including ‘Minority Report’, ‘The Hulk (A. Lee)’, ‘Aeon Flux’, ‘Stranger Than Fiction’ and ‘Iron Man’.

This entry was posted on Wednesday, March 7th, 2012 at 15:46 @698 and is filed under Scuttlebut. You can follow any responses to this entry through the RSS 2.0 feed. You can leave a response, or trackback from your own site.