Materials To Use For Your Fall-out Room And Refuge

Like many we wound down after what can only be described as a brilliant #dse2012 with a little bit of team R&R which started Thursday evening at the M Resort Spa Casino Las Vegas out in Henderson, a so-so Italian meal (but a great bottle of Australian red wine), a little bit of putting money into slot machines and capped off by a splendid Friday (a full day off for us) at Las Vegas Motor Speedway as we watched NASCAR cars go round and round and round and round in practice sessions and qualifying. 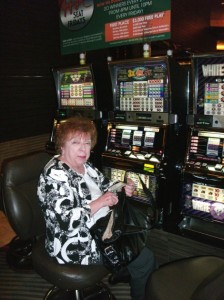 No Gail, Canadian dollar bills do not work!

Who would have guessed that Traveling Grandma was a closet NASCAR fan and knew all the cars and all the drivers?

Whilst much food and beverages were consumed by the team yours truly actually had fun watching a continuous stream of several dozen military aircraft leave Nellis Air Force base – Fairchild Republic A-10 Thunderbolts, F-15 Eagles, F-16 Fighting Falcons and several transport aircraft (but I digress).

This year (2012) has been a quiet year so far for us with legal spats but we head home to the United Kingdom later this evening with an interesting legal assault upon us. If the dear solicitors who sent it are reading this (as usual, it’s DailyDOOH not ‘daily dooh’ – we like our brand) it shall be answered sometime next week.

Who have we upset this time? Well unfortunately a super injunction means we cannot tell you but it has absolutely nothing to do with Ugandan discussions and I can categorically deny that it had anything to do with the Paris Hilton birthday party at the Tao nightclub on Tuesday evening that we definitely did not go to.

This entry was posted on Saturday, March 10th, 2012 at 00:56 @080 and is filed under Scuttlebut. You can follow any responses to this entry through the RSS 2.0 feed. You can leave a response, or trackback from your own site.