It’s Television That Turns Your Customers On!

“It’s Television That Turns Your Customers On!” is an interesting tag line from Jerry Hall, President/CEO, TargetCast Networks, Inc but possibly apt as they plan to re-use existing television sets and equipment in ‘casual sit-down restaurants’ with the addition of a patent-pending TargetCaster™ device.

The TargetCaster device includes a purpose-built OS, costs about half the price of an iPod Touch and is, we are told, impervious to hostile environments (mainly due to the fact that the device has no fans to suck anything in). 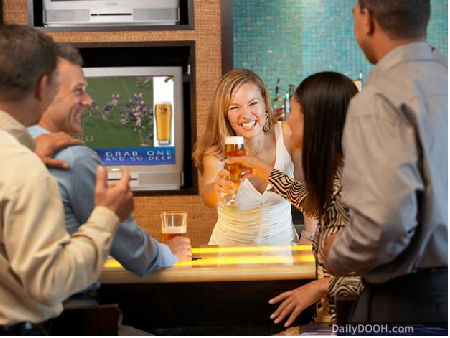 Where this gets interesting is in how the device works. Basically it fits between the panel and a STB and resizes the screen but NOT the image (note that it does not change the aspect ratio either).

Furthermore it does’t cover up any programming, or interfere with the viewing experience.

TarrgetCast Networks then delivers 15 second flash-like advertising along the sides of the remaining screen area. A recent Nielsen Media Research Ad Pilot conducted in October of this year showed that this approach resulted in very high recall and purchase intent.

If you take a look at the TargetCast Network executive team will see that many of them were part of the launch and development of Premier Retail Networks in the early 90s (Jerry himself ran the ad sales and marketing) and several others developed innovative video graphics and animation products for Pixar, Digitex and Scitex in the earlier stages of their careers.

This entry was posted on Tuesday, December 16th, 2008 at 19:32 @855 and is filed under DailyDOOH Update. You can follow any responses to this entry through the RSS 2.0 feed. You can leave a response, or trackback from your own site.

4 Responses to “It’s Television That Turns Your Customers On!”