Amscreen are always the quickest it seems to put their hand in the pocket when it comes to charitable causes and news in late last week was that they have just donated a plum’s worth of media space to Sport Relief. 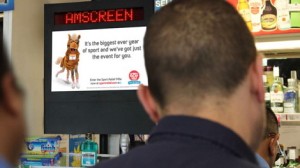 Amscreen, whose nationwide network delivers digital media to over 3,500 sites across the UK, will air the Sport Relief advert for a week from Sunday 18th March.

It follows a similar initiative with both Comic Relief and Children in Need in 2011, where Amscreen also donated space on their network to the charities.

Amscreen will screen content for the charity across its entire network in a bid to encourage people to participate in the Sport Relief Mile, which takes place on Sunday 25th March.

Officially of course he was much more erudite and said “Amscreen are delighted to be able to support such a worthy cause, once again. Sport Relief is a brilliant initiative and we are keen to get people active and raise as much as possible. By screening their call to action on the Amscreen network, over 25 million people will be encouraged to take part, and we hope this will make a difference”.

This entry was posted on Sunday, March 18th, 2012 at 13:55 @622 and is filed under DailyDOOH Update. You can follow any responses to this entry through the RSS 2.0 feed. You can leave a response, or trackback from your own site.