We were privileged to be among a select group of Canadian journalists invited to visit HP’s Networking Mobility R&D Labs in Montreal Wednesday, and while the event was geared mainly to IT specialists, it was interesting to see and to hear about HP’s priorities these days. 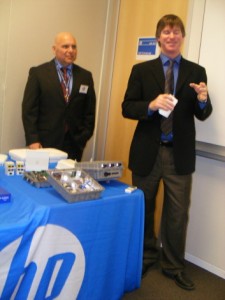 “Our future is moving towards mobility,” Stephane Laroche told us. Laroche, who has the lengthy title of senior wireless architect, HP Networking – Essential and Value Product Group, along with Mario Vitale, HP general manager, Quebec, discussed the company at length and gave us a tour of the testing labs, the development and testing engineers’ workplace and the software innovation engineers’ offices.

They also showed us some of the newest products developed by HP for use in hotel, hospital and university settings, many of which were first-to-market and for which HP holds patents and patents-pending.

After giving us a brief history of the company – founded in 1939, today a global company of 304,000 employees and with revenues of $127 billion – Laroche discussed the challenges being faced by the company in a world where there is expected to be 50 billion connected devices by year 2020.

In addition to security, chief among the challenges are working with the cloud, and management of mobile devices in workplaces where more and more people want to use their personal mobile smart phones, tablets and more.

A key area of concentration at the moment is being able to manage thousands of wireless devices in a closed environment all wanting to be used at once. 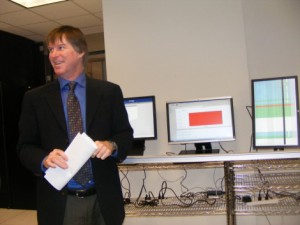 “Think, for example, of a hockey rink, where thousands of people all want to be on their connected devices at one time,” said Laroche. “We have to have ways to manage that.

“Further, people are asking when we will go all wireless,” he said. “Not this year, but probably sometime in the future. At the moment, we see that some things will remain wired.”

Like other industries, control and standardization are also prime considerations.

“A wireless problem is that there is no control, so in a wireless world, people must be prepared to accept some down time,” Laroche said. “But wireless will require less management. IT management will move more to the cloud.”

This entry was posted on Thursday, March 29th, 2012 at 01:53 @120 and is filed under DailyDOOH Update. You can follow any responses to this entry through the RSS 2.0 feed. You can leave a response, or trackback from your own site.