Ah, how I wish that when people have news stories like this, that they’d make us aware when they are happening, not weeks or months later. 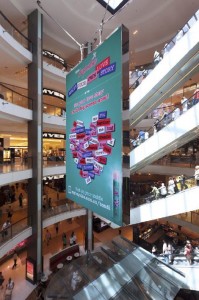 Nevertheless, it’s always nice to get news from far-off Australia, where LED displays from Brookings, South Dakota-based Daktronics and its Visiconn control solutions were involved in an interesting interactive marketing campaign that stretched over seven different Westfield Malls in Eastern Australia between Feb. 17-19, 2012.

Unilever ran a campaign titled ‘Love Story’ to promote its new fragrance line. This campaign involved a promotion that let shoppers design love notes with their smart phones and then have them displayed on a Daktronics digital display in the mall.

“We are seeing digital displays being used in very creative ways by engaging audiences via mobile devices,” says Rich Hintz, Daktroniks’ engineering manager. “Our Visiconn control solution and media players are capable of interfacing with third-party companies allowing for these types of unique applications.”

Content on the displays was created with Adobe Flash software, and the file was uploaded online to Daktronics cloud-based Visiconn solution and scheduled to run for 24 hours. The Visiconn system is an online-hosted solution allowing for content to be uploaded to a central location from any Internet connection. Once uploaded, Daktronics media players at each mall location downloaded the file from the Visiconn system and played it on the display. The media players checked back regularly for updates to ensure messages created by shoppers walking by were shown on that display in a timely manner. 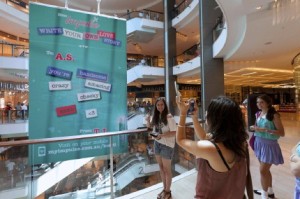 “Three continuous days and we didn’t run into any trouble with the displays or Visiconn,” says Michelle Barford, digital operations executive for Westfield BrandSpace. “It was a great success!”

Along with being able to send personalized messages to the displays in the mall, shoppers were also able to get their picture taken with their message in the background. The pictures were then posted to the company’s Facebook page.

Daktronics Visiconn display management solution allows users to run their displays from any Internet-ready computer. It has the ability to integrate multiple display technologies (LED, LCD and others). The technology offers the capability for the clients of Westfield to quickly create and display messages and graphics on the LED displays, allowing advertisers to better target their content to the audience at a particular location or certain time of day.

This entry was posted on Wednesday, April 18th, 2012 at 09:00 @417 and is filed under DailyDOOH Update. You can follow any responses to this entry through the RSS 2.0 feed. You can leave a response, or trackback from your own site.