God Save The Queen Her Digital Regime

Thousands of self portraits by children from across the UK will be projected on to the frontage of Buckingham Palace to form a montage image of HM The Queen, from 8.30 p.m. on Thursday 19th April 2012. 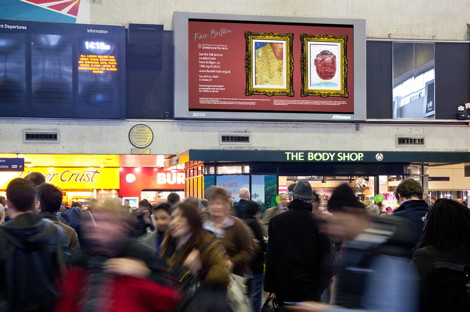 The Face Britain projections will run from 8.30 pm – 11.30 pm for three nights until Saturday 21st April.

Face Britain is a unique project created by The Prince’s Foundation for Children & the Arts and brought to life by PhotoBox to provide a platform to celebrate the nation’s children and young people in the lead up to HM The Queen’s Diamond Jubilee, The London Olympic and Paralympic Games.

Face Britain invited children aged 4-16 years of age to produce their own self portraits enabling them to explore their creativity and to consider their own identity and place in history as the 2012 generation. Portraits at all levels of skill, and in any medium were acceptable, including drawing, textiles, 3D, painting, graphics, and photography.

As well as the projection on to Buckingham Palace the montage portrait of HM The Queen will be simultaneously screened for 24 hours on BBC Big Screens in 18 public locations across the UK. It will also be screened across JCDecaux’s network of digital advertising screens in train stations and shopping centres across the UK.

The children’s individual portraits will also be shown across 200 JCDecaux screens by the end of 2012.

This one-off event can be witnessed outside Buckingham Palace, London SW1A 1AA from 19th-21st April, 8.30 pm-11.30 pm and the the montage can also be seen across the UK over 24 hours from 8.30pm on 19th April on the following BBC Big Screens…

The montage image will be attempting to break the Guinness World Records title for Most artists working on the same art installation – the current record is 28,267 artists who contributed to an installation in Israel in 2009. Following the projection of the montage onto Buckingham Palace, Guinness World Records officials will announce whether a new world record has been set.

This entry was posted on Wednesday, April 18th, 2012 at 16:35 @732 and is filed under DailyDOOH Update. You can follow any responses to this entry through the RSS 2.0 feed. You can leave a response, or trackback from your own site.