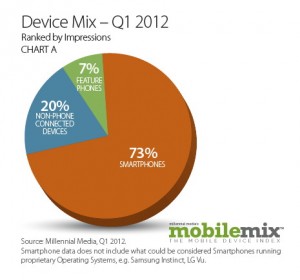 We noticed that Smartphones led the Device Mix, with 73% of the impressions in Q1.Though overall Smartphone impressions grew from Q4 2011 to Q1 2012, the percent of overall impressions was relatively flat quarter-over-quarter. Over the course of a year, however, there has seen significant growth in Smartphone impression share, as consumers upgraded from Feature Phones to more advanced mobile devices.

Some of the key points in this report include:

This entry was posted on Monday, May 28th, 2012 at 10:00 @458 and is filed under Scuttlebut. You can follow any responses to this entry through the RSS 2.0 feed. You can leave a response, or trackback from your own site.