MultiTouch Ltd., developer of modular multi-touch LCD displays, has collaborated with Snibbe Interactive, a San Francisco-based digital marketing and entertainment pioneer, for an interactive multi-touch table at The Mob Museum: The National Museum of Organized Crime and Law Enforcement, in Las Vegas. 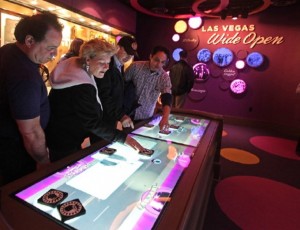 The Mob Museum installation, designed and programmed by Snibbe Interactive, enables museum visitors to visualize the connections between mob bosses and casinos by placing markers on two side-by-side HD tables that call up images, video, and text related to crime gangs and law enforcement figures.

MultiTouch displays are optimized for augmented reality applications in which fingers, hands, cards, and objects can be placed on displays to trigger information. The displays can accommodate an unlimited number of users, and can be stacked or combined into giant arrays – MultiTouch also recently introduced new designs for museum curators at the annual AAM2012 Museum Expo, in Minneapolis, Minnesota, Ed.

“The Mob Museum, as a true 21st-century facility, takes the ‘hands-on’ approach very seriously, by dedicating prime exhibit space to multi-touch displays,” says Timo Korpela, general manager of MultiTouch Americas. “We believe that they have created a model environment for museums to follow in digitally representing their collections and exhibits.”

“We like using the MultiTouch hardware in our interactive applications because they can be tiled together into large, multi-user social interactive experiences like we created for the Mob Museum,” says Scott Snibbe, founder and CEO of Snibbe Interactive..

MultiTouch and Snibbe are demonstrating this exhibit, as well as the Avatar table created for the James Cameron Exhibition at #InfoComm12 on Booth N1463.

MultiTouch is a developer of interactive display systems, based on proprietary software and hardware designs. The company is headquartered in Helsinki, Finland, with U.S. offices in Santa Clara, California, and New York City.

This entry was posted on Friday, June 15th, 2012 at 05:32 @272 and is filed under DailyDOOH Update. You can follow any responses to this entry through the RSS 2.0 feed. You can leave a response, or trackback from your own site.