Visix Inc., Norcross, Georgia-based maker of browser-based digital signage software, received the 2012 Best of InfoComm Award, sponsored by NEC Display Solutions and given to the best product or service at #InfoComm12.

Visix is donating the $10,000 prize from NEC Display Solutions to The Hirsch Academy, an Atlanta-based organization that meets the educational and developmental needs of children with learning differences. Visix won the award after its AxisTV Version 8.0 Digital Signage Software submission finished in the top five during the public voting period, and then judging by a panel of four industry experts. 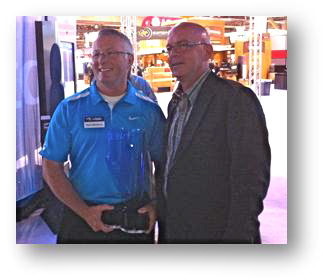 Is that Pierre Richer helping the LVPD with their enquiries?

Pierre Richer, NEC Display Solutions president and CEO, presented the award to Sean Matthews, president of Visix, during an awards ceremony June 15 in the NEC booth at the annual global professional AV and digital signage forum at the Las Vegas Convention Center in Las Vegas.

“The Best of InfoComm Award has grown in stature as a robust competition, and this year was no exception,” said Ashley Flaska, vice- president of marketing at NEC Display Solutions. “Kudos to Visix for capturing a hard-earned victory in this year’s program.”

“We’re honored to receive the 2012 Best of InfoComm Award from NEC and to support one of our favorite organizations in The Hirsch Academy,” Matthews said. “Visix has built a reputation for longevity and commitment to the digital signage and professional audio-visual industries, so we’re grateful for this recognition.”

This entry was posted on Wednesday, June 20th, 2012 at 04:59 @249 and is filed under DailyDOOH Update. You can follow any responses to this entry through the RSS 2.0 feed. You can leave a response, or trackback from your own site.