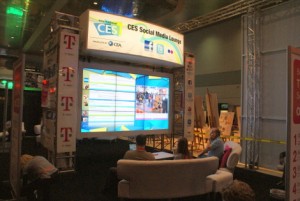 Mr. Tsuga’s keynote is slated for 8:30 a.m. on Tuesday, January 8, in the Venetian’s Palazzo Ballroom, immediately following a State of the CE Industry keynote address by Gary Shapiro, president and CEO, CEA.

“Panasonic is one of the largest and most dynamic consumer electronics companies in the world, and I congratulate Mr. Tsuga on his official appointment to president of Panasonic Corporation this morning,” said Shapiro. “We are thrilled to have Mr. Tsuga take the stage for his opening keynote at the 2013 International CES, and we look forward to hearing his vision for the future of Panasonic and its leadership in green innovation.”

Prior to taking on this leadership role for Panasonic, Mr. Tsuga was president of AVC Networks Company, the internal arm responsible for Panasonic’s audiovisual and information technology equipment business. Concurrently, he served as senior managing director and was a member of the board.

From 2008 to 2011, Mr. Tsuga served as president of Panasonic’s Automotive Systems Company and was also the managing executive officer of the corporation. During this time, he revived Panasonic’s automotive electronics business and laid the foundation for its expansion, taking it in new directions, including devices and systems for more eco-responsible vehicles.

In 2006, Mr. Tsuga led Panasonic’s efforts in digital network and software technology as executive officer, and from 2001 to 2004, he directed the Advance Appliances Development Center for audiovisual technologies. In addition to his internal Panasonic responsibilities, Mr. Tsuga has also actively contributed to advancing major industry efforts, including the standardization of the DVD and Blu-ray Disc formats.

This entry was posted on Thursday, June 28th, 2012 at 08:17 @386 and is filed under DailyDOOH Update. You can follow any responses to this entry through the RSS 2.0 feed. You can leave a response, or trackback from your own site.