When a friend in Sao Paulo took me to see his favourite bookstore in a shopping centre in the Avenida Paulista in the middle of the commercial district, I hardly expected to find a nest of video screens so well integrated into the surroundings. 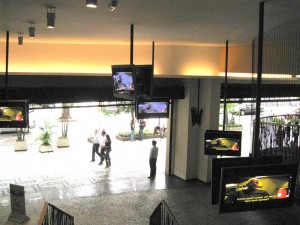 In all, the installation uses a network of 38 LG screens in various sizes, from 17″ up to 42″. There are screens strategically placed inside the store (with a separate Disney programme in the kiddies section) as well as in the windows and externally in the arcade, at the stairs leading to the upper floors.

The programming is combination of a live feed from Terra TV interspersed with film trailers and  ads from book publishers such as Elsevier, Sextante, Record and Bertrand Brasil. Livraria sells ad spots of 15 and 30 seconds and considers the network to be a media in itself and an important element of their communication strategy.  All of the other 7 stores in the chain are similarly equipped. 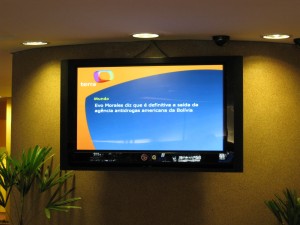 Livraria Cultura was originally created in 1947 as a lending service by Eva Herz who had fled from Germany in 1938. It became a fully-fledged bookstore in 1950 as the business developed. The chain is now run by her son, Peter, along with his sons Sergio & Fabio, and counts a total of 8 outlets: in Campinas, Recife, Porto Alegre and Brasilia plus four in São Paulo. It also has an online service, set up in 1995, which distributes on a world-wide basis. The catalogue covers 2,6 million titles (in Portuguese, Spanish, French, Italian, German and English) and 70 000 CD & DVD titles. A further store in Brasilia is planned for 2009. 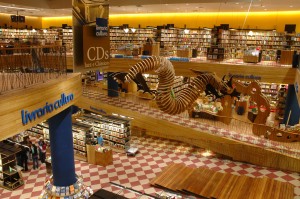 In 2007, the chain completely revamped its image and opened up this flagship store in São Paulo; this is now the biggest bookstore in Brazil, covering 4.300 square meters over three floors.

It positions itself as more of a cultural centre than a mere bookshop, regularly featuring events such as lectures, readings, concerts as well as author signing sessions.

There is also a coffee shop and visitors are encouraged to linger and read & relax in the luxurious bean-bag area. 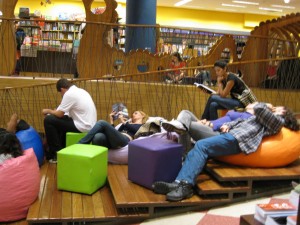 “Each store is an entertainment centre, where the customers go not only to buy, but to bring themselves up to date with the world of culture and, to debate ideas”, says director Peter Herz.  This theme is continued online, with a very active cultural blog which covers a wide range of current (cultural) events and topics.

Overall, the store is an excellent example of how to integrate digital and analogue media; I could happily have spent many hours there, but, alas, I had a plane to catch…

This entry was posted on Tuesday, January 20th, 2009 at 13:51 @619 and is filed under Scuttlebut. You can follow any responses to this entry through the RSS 2.0 feed. You can leave a response, or trackback from your own site.