Two Christie MicroTiles displays are stopping moviegoers in their tracks when they walk into the Cinemas Guzzo IMAX theater lobby at the Mega Plex Marché Central 18 in Montreal. 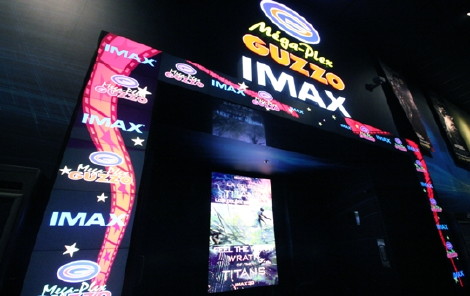 The eye-catching displays – one in a 6 high by 11 wide archway, and the other centered just past the archway in a 3 wide by 6 high array – draw audiences into the theater itself with captivating content produced by Arsenal Media, Montreal-based specialist in digital content creation and concept development with Christie MicroTiles.

Once customers walk under the arch, the interior Christie MicroTiles wall greets them with a large movie poster with movie trailers playing inside the poster.

“Everyone Loves the Christie MicroTiles Display,” says Vincenzo Guzzo, executive vice-president, Cinemas Guzzo. “I saw them for the first time at CinemaCon 2011 and I had never seen something so bright, crisp and sharp – and those are the most important things for me.

“Arsenal Media produced some very interesting and complex content that runs on the MicroTiles. Everyone loves it and, in particular, the younger crowd who has said it’s really cool. The MicroTiles makes a lot of people just stop and take a minute to look at the whole display. Once they walk through the arch, they stop and stare again at the movie trailers playing inside the movie poster. 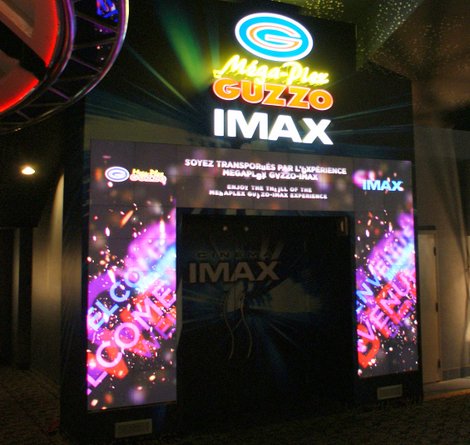 “The Christie MicroTiles, out of all comparable products, are probably the best because not only are they so bright and crisp, they can they be built into irregular shapes and are practically seamless.”

“Our company did the consultation for the construction and electrical work necessary, plus the actual installation and calibration of the MicroTiles,” said J.P. Berardini, branch manager, Genesis Integration Inc.. “Guzzo wanted an archway because they want moviegoers to feel like they are walking into ‘an experience’, not just a movie theater. Genesis helped create a 3D-like experience with both the archway and the interior array and it works because of the MicroTiles.”

“This installation is a perfect fit from both a shape and strategic perspective,” said Angela Tanzi, vice-president of operations, Arsenal Media. “We supported the configuration concept by leveraging shape and creating content that generated a very impactful point of focus for the arch. When customers enter the GUZZO-IMAX theater, they recognize right away that they’re up for an enhanced visual and cinematic experience.”

In Nov./11, Guzzo announced that all its screens, support and services were converting to digital with Christie projectors.

Les Cinémas Guzzo, one of Canada’s leading independent chains and the largest privately owned cinema chain in Quebec, has more than 151 screens in 12 theater complexes.

This entry was posted on Thursday, July 12th, 2012 at 21:43 @946 and is filed under DailyDOOH Update. You can follow any responses to this entry through the RSS 2.0 feed. You can leave a response, or trackback from your own site.