T-Mobile Adwalker Campaign at The Hawthorns 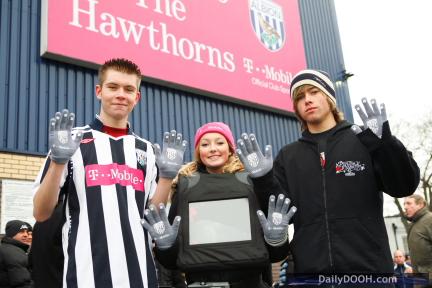 I see that last week Adwalker had teams of promoters at the West Bromwich Albion versus Charlton football match.

Can you believe that they distributed 20,000 pairs of T-Mobile ‘texting gloves’ (being the wrong side of 40 I am not sure what a ‘texting glove’ is and why you would want one – all the youngsters in the office have fled home to Hamburg, Madrid and Leeds so I can’t ask anyone)

The official attendance figure at that game was 20,346 so attracting via the weareable Adwalker screens and distributing the gloves in just over 2 hours is some going.

STOP PRESS Just been sent this “T-Mobile has created the specially adapted Texting Gloves with small cuts in the thumb of the glove so West Brom fans only have to expose their thumbs when texting and can keep the rest of their hand warm. When finished, the thumb can be covered until needed for texting again.”

This entry was posted on Friday, December 21st, 2007 at 10:05 @462 and is filed under Scuttlebut. You can follow any responses to this entry through the RSS 2.0 feed. You can leave a response, or trackback from your own site.