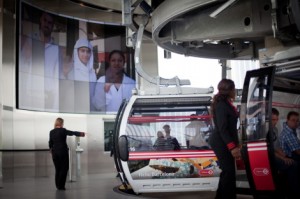 The Emirates Air Line (also known as the Thames cable car) is a cable car link across the River Thames in London, built with sponsorship from the Emirates airline.

Working with The Pioneer Group, Harris Digital Out-of-Home has installed its InfoCaster DOOH turnkey solution – made of the InfoCaster software and hardware suite – within a digital signage network made up of six video-walls and 78 screens, which broadcasts a rich blend of promotional content for passengers crossing the Thames using this unique form of British urban transport. 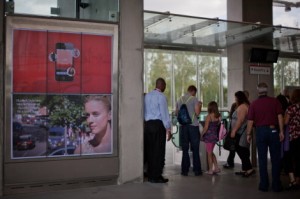 Using InfoCaster, the scheme’s operators can display a diversity of video content on the various large screen displays within the Emirates Air Line terminals in both Greenwich and Newham. A major driver in the decision to select Harris InfoCaster for this prestigious project is the high quality output, ability to drive a video wall at its native resolution, display control features, management capabilities, and reliability. InfoCaster is able to display both images and videos in the video wall’s native resolution without any need to scale or use additional video processors.

“At a time when a great deal of investment is being made in London, this is a really eye-catching and arresting project,” says Paul Childerhouse, managing director at The Pioneer Group. “The stunning moving image quality on such large screens that we are able to create using Harris InfoCaster is tremendous. Alongside its technical capabilities, Harris’ willingness to support the installation with its team of engineers, to help make sure that the system is doing exactly what we want and need has helped create a fantastic end result.”

Harris management believes that this installation has created a new standard in transport information and entertainment systems.

“Passengers are treated to 360 panoramic views of London when they use the Emirates Air Line, so it’s appropriate that the stunning images start before they step aboard the cabins,” said Denise MacDonell, director and general manager for Digital Out-of-Home, Harris Broadcast Communications. “With this installation, Harris has cemented its reputation as a leading digital signage technology supplier to the transport and tourist industries.”

This entry was posted on Thursday, September 13th, 2012 at 09:58 @457 and is filed under Scuttlebut. You can follow any responses to this entry through the RSS 2.0 feed. You can leave a response, or trackback from your own site.