The best entries in Ocean Outdoor’s Art of Outdoor digital competition, which rewards innovative and creative work in digital out of home advertising, will be showcased at the IMAX cinema next week in London. 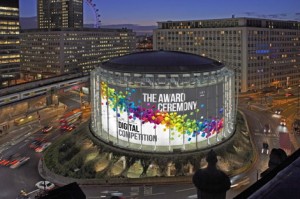 The winners will be announced next Thursday 11th October when Ocean, in association with Brand Republic, hosts an awards ceremony at the IMAX cinema.

Richard Malton, Marketing Director at Ocean Outdoor told us “Once again the calibre of entries has been exceptional and the scale of the creative ideas impressive. Digital out of home is a powerful medium with big audiences, but this year’s entries have more than captured the potential and the possibilities.”

This entry was posted on Wednesday, October 3rd, 2012 at 08:18 @387 and is filed under Scuttlebut. You can follow any responses to this entry through the RSS 2.0 feed. You can leave a response, or trackback from your own site.