“We wanted something that would allow us to really customize our sales presentation, and really give people a sense of what these exciting environments are all about,” says Chuck Strottman, Reach Media Group‘s vice-president of marketing. 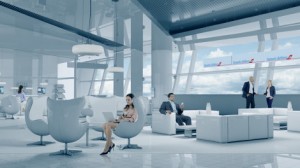 Strottman is referring to the multiple networks owned by RMG that all target the executive business traveler: airport lounges, taxis, Amtrak trains and in-flight.

RMG wanted something that it would be actually able to show its business partners.

The principals of the international award-winning creative studio Transparent House was asked to collaborate with RMG, whose digital media networks within the air travel industry include more than 2,000 aircraft and 120,000 place-based screens.

The company reaches more than 35 million monthly viewers. It also provides technology and professional services for global companies looking to enter the digital signage market, and works with leading global advertising agencies and top U.S. advertisers in industries that include consumer goods, auto, finance and technology. 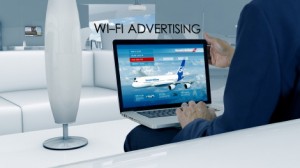 For this project, the company’s executives commissioned Transparent House to produce a brand film presenting a high-tech virtual world that would allow RMG’s different business partners to visualize how custom messaging appears across the company’s key networks.

Envisioned as sales tool that RMG would be able to customize, the project faced many constraints, including time, as well as potentially costly production involving filming in an airplane and an airport lounge.

“Our goal is making 3D the spectacular core of a brand’s marketing campaigns, and this project was a very exciting opportunity for us to show RMG and its partners a lot of these capabilities in a very short amount of time,” says Denis Krylov TH principal and co-founder. 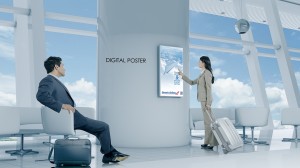 Using the Canon 5D Mark III, TH’s principals photographed male and female models in business attire and in various poses and lighting setups. These images were then artfully placed and composited into the CG environments of the animatics and the final content. 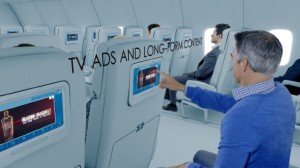 “We are especially proud of finding creative solutions for special projects like this,” says Krista Mollion, TH principal and strategist. “For example, our senior motion designer came up with the logo animation for RMG Networks which has gotten a lot of great feedback from our clients. It was his own artistic interpretation, and we feel it adds a lot of value to the presentation.”

“We had never really considered computer graphics before as a solution, but working with Transparent House was great, and this video is now among the most valuable marketing pieces we have,” says Strottman. “It’s extremely versatile, the quality is excellent, and it does an amazing job showcasing our media assets.”

This entry was posted on Friday, October 5th, 2012 at 10:00 @458 and is filed under DailyDOOH Update. You can follow any responses to this entry through the RSS 2.0 feed. You can leave a response, or trackback from your own site.