Norcross, Georgia-based NanoLumens now has bragging rights as having come to the aid of Bond, James Bond. 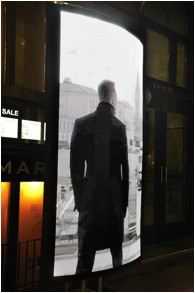 Two of NanoLumens’ high tech NanoFlex 112” displays were featured on the black carpet of an after-party for a Toronto charity screening of Skyfall, the 23rd James Bond film, The screening was held to benefit Dignitas International, a medical humanitarian organization dedicated to providing a quality of life with dignity for children, youth and families affected by HIV/AIDS in the developing world.

NanoLumens provided the special event with two NanoFlex 112 displays that were showcased prominently on a 10’ tower adjacent to the front entrance, and brought the black carpet to the next level of sophistication. The NanoFlex displays were used to show Skyfall’s theatrical trailer, as well as promotional ads for a new 007-themed cologne.

According to Chris Tampin, key Account executive/designer at APG Displays, NanoLumens’ Canadian distributor, the event organizers were looking for a display setup that would make the after-party shine from the moment the guests arrived, and NanoLumens’ NanoFlex displays were the perfect choice.

“Anyone who knows anything about James Bond knows that the legendary British spy loves and relies upon the very latest in technology of all sorts in his never-ending quest to thwart evil and save the world,” says Tampin. “Knowing this, it was important that everything about this charity event reflect and amplify the high tech atmosphere of the film — and the NanoFlex displays did exactly that!

“The NanoFlex displays were chosen for the event precisely because they could be incorporated creatively into the event design. Everyone, from the event organizers to the guests, was amazed with the quality and brightness of the displays.”

“NanoFlex displays are a state-of-the-art display technology that is unlike anything else in the market today, making them the obvious choice for the after-party,” says Josh Byrd, director of marketing at NanoLumens. “Like the legendary Bond himself, NanoFlex displays are able to do what was previously thought to be impossible.”

Dignitas International recently hosted the advanced screening at the Scotiabank Theater in Toronto, and drew more than 350 guests, who attended the screening and ended the night at the Skyfall After-Party at The Spoke Club in downtown Toronto. The event, supported in large part by Presenting Sponsors IMAX and EON Productions, raised more than $150,000 in support of Dignitas International’s life-saving frontline care and research efforts in Africa.

Designed and assembled in the United States, NanoLumens’ multi-award-winning displays are offered in standard configurations as well as design-specific configurations to fit virtually any size, shape or curvature in both the NanoFlex line of flexible displays and the NanoSlim line of fixed frame displays.

This entry was posted on Thursday, November 15th, 2012 at 09:57 @456 and is filed under DailyDOOH Update. You can follow any responses to this entry through the RSS 2.0 feed. You can leave a response, or trackback from your own site.