Digital way-finding specialist firm Jibestream has been selected as one of Canada’s Top 20 Most Innovative Companies by The Canadian Innovation Exchange (CIX). 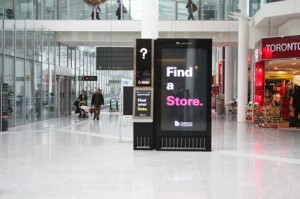 Among many notable projects, Jibestream’s highest profile install is likely the the ClearChannel digital billboard and wayfinding initiative at Person Airport, pictured below.

It’s interesting that Jibestream was named in the ICT and not Digital Media category, highlighting the overall trend of Digital Signage increasingly aligning with IT instead of it’s roots in the AV or media realm.

Jibestream’s way-finding application will be featured (among other top 20 CIX finalists)  at next week’s CIX Forum taking place at MaRS Discovery District in Toronto.

This entry was posted on Wednesday, November 21st, 2012 at 14:35 @649 and is filed under DailyDOOH Update. You can follow any responses to this entry through the RSS 2.0 feed. You can leave a response, or trackback from your own site.