Coverage of this story on other sites did not do this installation justice at all so we thought we would ask for some more pictures and do it properly.

First off, no mention anywhere (else) that the ‘Houses of Worship‘ marketplace is absolutely huge business in the US and indeed, especially with AV, projection systems and increasingly digital signage. The clever chaps at Net Display Systems obviously realised that there is similar potential in the Middle East and here we see them with a big rollout, and set to get bigger in the UAE. 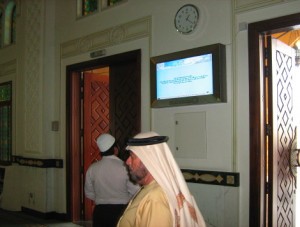 Worshipers will be able to view information on all aspects of the Islamic faith mixed with specific day-to-day activities relating to their local mosque across The United Arab Emirates. Lectures from other principal mosques will also form a part of the weekly schedule as the system is used to help promote awareness of Islamic moderation and tolerance.

Net Display Systems’ PADS 3.1 Professional Platform has already been installed in 300 mosques with a further 250 mosques lined up in the first phase of a project which may eventually involve 5,000 licences.

We believe that this is the LARGEST digital signage roll out in The United Arab Emirates to date.

Mark Leo, responsible for NDS business development in the MENA (Middle East North Africa) region told us “We are confident that the project will benefit the Ministry of Islamic Affairs to effectively communicate to worshipers across the Emirates”

Net Display Systems Middle East, a strategic alliance between Gulf Commercial Group and Net Display Systems BV, The Netherlands managed the customisation and integration of PADS 3.1 Professional using their team of software engineers managed by Mr. Radwan El Zein and Ahmad Mohammad from their Dubai offices. Commenting on the project.

This entry was posted on Thursday, January 22nd, 2009 at 12:37 @567 and is filed under Scuttlebut. You can follow any responses to this entry through the RSS 2.0 feed. You can leave a response, or trackback from your own site.