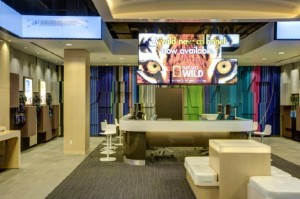 Since the first 4-units high by 6-units wide array was installed in May at its Sunridge Mall store in Calgary, Alberta, the unique waterfall displays have now been added in three more Shaw retail locations in Alberta and British Columbia, with more installations planned in the future.

“We wanted to make the stores exciting enough so the customer would look at the displays and see a reason to walk into the store,” says James Ferguson, national director, retail, Shaw Communications. “Christie MicroTiles were the answer.”

Ferguson says that the decision to use Christie MicroTiles was easy because Shaw – parent company of Global Television – wanted a technology that would give it a ‘leg up’ on other stores, and Applied Electronics had already installed a 4-high by 10-wide MicroTiles array in Global Television’s Toronto studio for its morning news show. Familiar with the Toronto installation, Julie Shaw, vice president, facilities, design and management at Shaw Communications, suggested MicroTiles as an option.

“Julie set the tone by raving about what an ‘awesome product’ the MicroTiles were,” says Stephen Monteith, AV design and sales representative at Applied Electronics. “After that, it was an easy decision for the visionaries at Shaw. They immediately realized how the MicroTiles could be used in unique ways within the stores to capture the audiences’ attention.”

Having decided on Christie MicroTiles, Ferguson and his team needed to decide where to put them and what content to show while creating a distinctive visual experience that would take advantage of Christie’s technology. 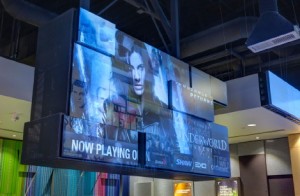 Rather than have all 24 MicroTiles depicting one piece of content simultaneously, Ferguson opted for a waterfall effect with the tiles slightly staggered with gaps along the X Y and Z access in a special bracket designed by RP Visuals. Content including media, innovative new products and services, in market offers and community initiatives are shown as individual thumbnails on the MicroTiles, allowing each piece of content to cascade across the whole screen, before pulsing back into one thumbnail. Hanging from the ceiling in each store, the waterfall configurations catch the attention of those who enter the store – and those passing by.

Combining proven DLP technology with the long life and reliability of LED, Christie MicroTiles are designed for maximum image quality in demanding indoor, high-ambient light environments. At just 16 inches wide by 12 tall and less than a foot deep, they are ideal for a wide range of applications, including architectural elements, out-of-home advertising, command and control video walls, and event production.

“We wanted to give our video people a cool ‘sandbox’ to play in that provided content versatility and didn’t limit their imagination,” says Ferguson. “Christie MicroTiles did just that, with the content provided by Breakhouse (of Halifax, Nova Scotia). Our customers love it and their eyes are drawn to it because it is so different from what they are used to seeing. There is an old adage in retail that customers don’t look up – but in this case they do because the MicroTiles display is different, flashy, and it has content that draws their eye to it.”

“The popularity of Christie MicroTiles continues to grow worldwide and here in Canada, with almost boundless application possibilities and configurations limited only by the imagination,” says Dave Muscat, Christie’s senior director of sales, Canada. “We are glad MicroTiles entice Shaw’s clients to look up when they are in the store since this also increases the value of Shaw’s upper shelf space and revenue possibilities.”

This entry was posted on Thursday, December 6th, 2012 at 09:58 @456 and is filed under DailyDOOH Update. You can follow any responses to this entry through the RSS 2.0 feed. You can leave a response, or trackback from your own site.