JCDecaux is the sole advertising concessionaire at Dubai’s International Airport and it has just launched a new digital signage network with content from specialised digital content provider BlueFox. 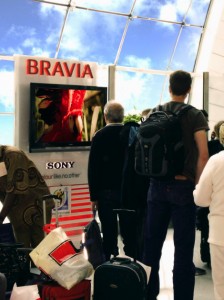 Guillaume de la Tour from Bluefox told us “To give visitors a relaxing visual tour around the globe while they are waiting to embark on their own journey, the videos feature two programmes on a theme of ‘Time for Escape'”

He added “firstly a selection of 50 extraordinary trips around the world including Machu Picchu, Egypt Pyramids and Statue of Liberty; as well as a collection of the most beautiful images presented by the BBC”

All programmes come with an interlude of sponsors’ animated logo and commercials.

Bluefox and JCDecaux are expected to collaborate on other digital signage projects such as the ones operating in the Paris Orly and Roissy airports in France.

This entry was posted on Saturday, January 31st, 2009 at 06:33 @314 and is filed under Scuttlebut. You can follow any responses to this entry through the RSS 2.0 feed. You can leave a response, or trackback from your own site.