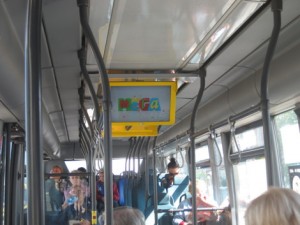 A journey on the Russian MegaBus leaves passengers with about 40 minutes of spare time. The company understood that this offered a huge opportunity to communicate with and influence its customers. It found that digital signage offered the perfect tools to reach their audience and turned to Captivate Media and IMTV to implement an interactive online digital network on its bus fleet.

104 Scala players were installed in MegaBuses in Moscow and St. Petersburg. The busses were equipped with 22 inch HD LCD screens, 3 in each bus. Via a satellite connection the screens are in permanent contact with the MegaBus offices.

Out of the more than 1.2 million passengers on the MegaBus the majority are affluent females aged 20-40, studies show. They are expected to view the video sequences shown on board at least once during their journey with the MegaBus. The solution allows MegaBus to present its passengers with a balanced mix of infotainment and commercials for products and events at the destination.

MegaBus is a shuttle bus offered by MEGA, a new concept for shopping, leisure and relaxation for the entire family initiated by IKEA. The MegaBus transports passengers from major transportation hubs in Moscow and St Petersburg to the MEGA malls usually located in the outskirts of the city.

This entry was posted on Tuesday, February 12th, 2013 at 09:06 @421 and is filed under DailyDOOH Update. You can follow any responses to this entry through the RSS 2.0 feed. You can leave a response, or trackback from your own site.