We had a nice chat with Chuck Adams, president of DOOH Solutions at Highlands Digital Media, a young but growing company that we’ve been keeping our eye on. 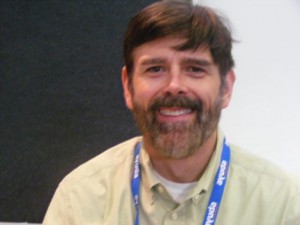 The privately owned, Birmingham, Alabama-based firm founded in 2009 had 40 screens when Adams joined the company in 2011, but has grown to a current 75 locations, with 22 more lined up for this year.

These follow
Highlands’ 10-store test in multiple markets prior to its roll-out of almost 100 locations in the automotive field that we understand could eventually also include another 100 franchisees.

The company is also doing a 10-city test (including Las Vegas) for what is believed to be a growing cellular company.

In addition, we understand that Highlands has just been selected to handle 90 displays in Regions Field, the new site of the minor league baseball Birmingham Barons.

“We offer a turnkey solution and have done retail, medical and country clubs,” Adams said. “Last year we retooled our hardware deployment and moved to a different software (Montreal-based BroadSign. Most of our work so far spans Texas, Virginia and everywhere in-between.”

Highlands was at the show to look at what else is out there in terms of solutions, and specifically to meet connections that could help him in the So-Lo-Mo sector.

This entry was posted on Thursday, March 7th, 2013 at 01:42 @112 and is filed under DailyDOOH Update. You can follow any responses to this entry through the RSS 2.0 feed. You can leave a response, or trackback from your own site.