The 10th Anniversary presentation of #dse2013 shattered all previous records – considered all the more noteworthy because participation at DSE is a barometer for the digital signage industry and reflects the rate of adoption across more than 20 business categories. 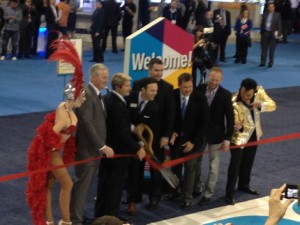 In spite of a severe snowstorm, which shut down airports in the northeast and midwest of the US, precluding attendance by many attendees and exhibitors who had already pre-registered, the number of qualified attendees in 2013 still managed to edge past the record set in 2012.

Further, those who came – from a record number of 77 countries – were even more engaged than last year, reflected by a 9% increase in conference participation.

Historically, exhibitor satisfaction is the best gauge of attendee engagement, and nearly 80% of the show floor for 2014 has already been reserved!

Qualified attendance: was 4,080 , which was 1.4% higher than last year and an all-time record. However, with the aforementioned snowstorms, 1,400 exhibit only pre-registrants were no-shows, which is a much larger ‘no-show’ number than in past years. Exhibitor attendance was 2,158 , up 15% vs. 2012, an all-time record.

This entry was posted on Thursday, March 7th, 2013 at 07:00 @333 and is filed under DailyDOOH Update. You can follow any responses to this entry through the RSS 2.0 feed. You can leave a response, or trackback from your own site.