Captive Audience network, Regina, is running a campaign on behalf of the Saskatchewan Government Insurance on resto/bar washroom digital and static screens across the Canadian province of Saskatchewan. 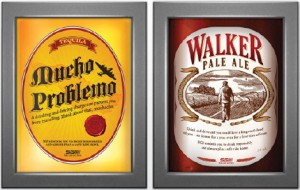 The ads are intended to inform the viewer of the many consequences of drinking and driving, without resorting to scare tactics or ‘finger-wagging’.

The campaign creative and media buy is the work of the Phoenix Group, a 25-year-old agency in Regina.

“Research revealed that our audience did not want a dark message from Saskatchewan Government Insurance,” says David Bellerive, vice-president creative services and media at Phoenix Group.

Art work shows false liquor labels with messages about drinking responsibly. The campaign is scheduled to run for a year, with a new, faux liquor ad appearing every few months.

Captive Audience is an independent company that partners with Montreal-based NEWAD as required for client campaigns. It has resto/bar digital and static screens throughout Saskatchewan as well as digital screens in universities.

This entry was posted on Friday, February 6th, 2009 at 08:14 @385 and is filed under Scuttlebut. You can follow any responses to this entry through the RSS 2.0 feed. You can leave a response, or trackback from your own site.