UM London and out of home planning and buying specialist Rapport have collaborated with Ministry of Experience to bring Wi-Fi enabled benches to London and Birmingham parks as part of their work for the new Microsoft ‘work from anywhere’ campaign. 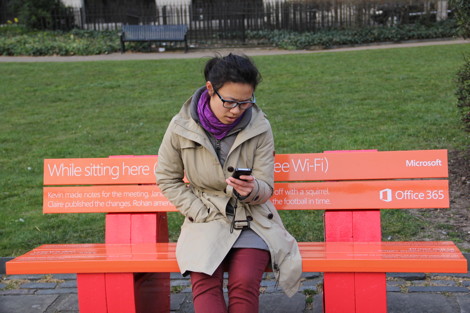 This is believed to be the first time any of these parks have allowed commercial advertising in their spaces. Locations in Birmingham include Victoria Square and Colmore Square.

The park benches have been designed to meet current environmental considerations, being made from 100 per cent recycled plastic and with power generated by renewable energy sources (85 per cent hydro, eight per cent wind and seven per cent solar).

This entry was posted on Tuesday, April 16th, 2013 at 09:59 @457 and is filed under DailyDOOH Update. You can follow any responses to this entry through the RSS 2.0 feed. You can leave a response, or trackback from your own site.