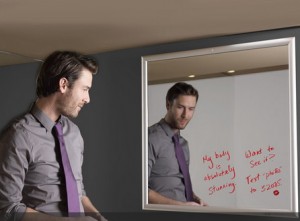 The company announced findings based on its AddMirror installed counters across random resto-lounges in Toronto, Montreal and Vancouver in Jan./12.

After over 16 months of data collection, results showed that actual AddMirror impressions are 45% higher than was initially predicted.

Judging by the study figures, advertisers can expect to see over 25,500 impressions per AddMirror per four-week campaign. As part of its commitment to advertisers, AddMirror will be installing counters in 40 additional units this summer.

The AddMirror is an interactive mirror, a motion sensor is activated when a customer approaches the AddMirror, causing it to ‘come to life’ displaying an advertiser’s message in a fun and memorable way. Advertisers receive dedicated, impactful campaigns since their media space is never shared with others.

“It’s an effective way to reach the audience,” says Eli Gershkovitch, Steamworks owner, Vancouver. “They’re in a place where they’re somewhat captive.” In the past, Gershkovitch refused to allow advertising to invade his restaurant’s restrooms. “But I liked the AddMirror concept because it adds an element of fun,” he says.

Over the last four years, AddMirror has seen brands like Ford, Telus, Calvin Klein and BMW make use of the cool, trendy and fun network.

“We are pleased to have been able to design, develop and manufacture our current AddMirror in Canada.” says Elliott Atkins, AddMirror president. “It is exciting to us that Canadian technology has allowed us to deliver such great impression results.”

AddMirror Media Ventures is a partnership between AddMirror Canada Limited and Media City. Since 2008, AddMirror and Media City have worked together to build products, features and a network that provides significant value to clients, with Media City representing AddMirror for advertising sales.