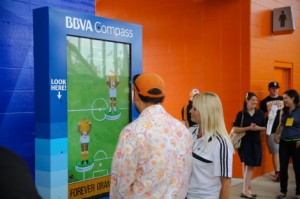 At the same time, they can showcase their ‘Forever Orange’ pride with virtual face paint photos that can be shared with friends.

At Dynamo home games in recent weeks, MVP Interactive deployed its Morphing Station in the concourse of BBVA Compass Stadium. Fans who engaged the freestanding kiosk had their picture taken by the unit’s embedded camera. The facial recognition software registered the users face and their image appeared on the 55” touchscreen, at which point the fan could then choose from options including hairdos, skin tone and jerseys to customize their human bobblehead or select their ‘Forever Orange’ virtual face paint. The final result produced a free virtual bobblehead or ‘Forever Orange’ face paint image that the fan could choose to receive by entering their email address and then upload directly to Facebook or Twitter.

In two weeks, the campaign produced more than 3,100 impressions and captured close to 300 email addresses. BBVA Compass Bank saw a 50% increase in credit card applications as a result. 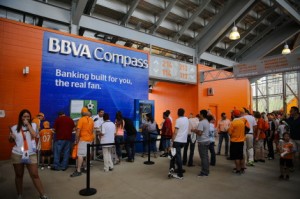 “These days, fans visit stadiums and arenas not just to see the game but to be entertained and to have a great time at the venue itself,” says James Giglio, CEO of MVP Interactive. “The Morphing Station is an innovative and fun way for fans of the Dynamo to show their enthusiasm for the team and adds another element of engagement and excitement to the experience of going to a game at BBVA Compass Stadium. It also provides BBVA Compass the ability to connect with consumers in an unprecedented, fun way – something for which financial institutions aren’t widely known.”

This is the latest Morphing Station activation unveiled by MVP Interactive. The kiosks debuted at the NBA All-Star Weekend in Houston this past February where more than 1,500 interactions were generated and was also deployed for Houston Rocket NBA playoff games at the Toyota Center.

The Dynamo Morphing Station is a campaign developed in conjunction with team sponsor BBVA Compass Bank. The kiosk itself is adorned with BBVA Compass logo and branding and the emails sent to fans with their bobblehead or Forever Orange image included the bank’s logo, website and promotional content to enroll in official Dynamo related banking products like team branded credit or debit cards. 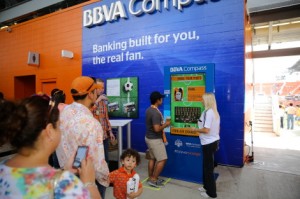 “The Morphing Station provides brands and sponsors with an opportunity to more deeply engage fans at the game and become associated with an experience that continues once the game is over,” says Giglio.

The Morphing Station will be a fixture at Dynamo home games throughout the remainder of the season.

This entry was posted on Tuesday, June 11th, 2013 at 10:00 @458 and is filed under DailyDOOH Update. You can follow any responses to this entry through the RSS 2.0 feed. You can leave a response, or trackback from your own site.