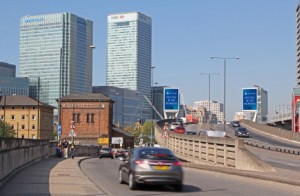 The unveiling of Sony’s first major games console since the PlayStation 3 went on sale on 2006, was aimed at early morning commuters, running across nine Ocean sites including Two Towers East and West, Eastern Motion, Trinity Leeds Axis@Hacienda and the Screen@New Street.

Manning Gottlieb OMD planned and coordinated the campaign, with bookings by Talon Outdoor, and creative by Drum and Lick. This was the first reveal of the design and look of Sony’s new black box console that goes on sale later this year. The wording of each advertisement was changed to reflect the name of the City where it was appearing.

To build anticipation, a teaser campaign telling commuters ‘We’ll see you in the morning’ ran across the same Ocean sites during rush hour Monday.

James Thompson, Manning Gottlieb OMD account director, says, “Knowing that the hotly anticipated image of the PS4 would be released overnight, we utilised the flexibility of Ocean’s premium digital outdoor inventory to showcase the image across the UK, just hours after it was released from E3’s gaming conference in LA. Running a tease message the night before was a great way to drive excitement to a broader audience ahead of the big reveal.”

“This campaign really demonstrates that, thanks to digital, OOH has come of age and is a really exciting option for brands,” says Eric Newnham, Talon’s CEO. “You could never have delivered a campaign like this with old format posters but now, not only can we do something quickly, we can also be strategic, stealthy and highly effective.’

“This is a genius use of premium digital outdoor to herald one of the most anticipated launches in the home entertainment sector of the year,” says Rob Hesketh, Ocean Outdoor account director.

Sony’s new Playstation made its hands-on debut at the E3 show, an annual industry gaming conference, in Los Angeles at 18:00 Monday evening, June 10.

This entry was posted on Tuesday, June 11th, 2013 at 21:22 @931 and is filed under DailyDOOH Update. You can follow any responses to this entry through the RSS 2.0 feed. You can leave a response, or trackback from your own site.