Why (Android) Digital Signage Players Are Not Created Equal

In this past year, the digital signage industry appears to have suddenly woken up to the thrill of Android and embrace it, if somehow, it were a saviour for us all. 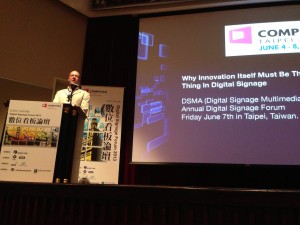 A few weeks ago I had the privilege of joining on stage, in Taiwan, Adrian Cotterill, DailyDOOH’s Editor-in-Chief, at a digital signage seminar with 300-plus attendees.

I nodded hard when I hear Adrian proclaiming that “launching an Android player is not innovation.”

These days it is easy to find plenty of (so-called) ‘free’ digital signage apps available for download, and lots of cheap Android tablets, boxes, and sticks ‘reviewed’ by various digital signage consultants / bloggers / influencers BUT is this really what next-generation digital signage is all about?

From the people I spoke to everywhere in our industry, it is surprising that a ‘good’ Android player is hard to come by. It’s not about the number of CPU cores or clock speed, I’ve learned. It’s how well it meets the needs of the industry’s applications and solutions.

In a recent online interview I shared my thoughts on Android and said … “There is of course a huge momentum for Android coming from the consumer market, but Android comes with a lot of challenge … [We] heavily modify the Android source code to make it more robust, and more secure.”

Here, I hope to share with you a few truths that lie underneath the naïve surface of the new wave.

I hope I have shared with you a little on why we deserved that final compliment and I hope that the next time you think about picking a hardware partner, you will consider IAdea.

I believe that our dedicated media appliances and digital signboards are quite simply the best hardware you can find to add value to your own digital signage solution.

This entry was posted on Monday, June 24th, 2013 at 12:33 @565 and is filed under DailyDOOH Update. You can follow any responses to this entry through the RSS 2.0 feed. You can leave a response, or trackback from your own site.