Christie, global provider of advanced cinema technologies and visual display solutions, recently showcased its Christie MicroTiles at the opening of the new Interactive Media Building at the University of Southern California. 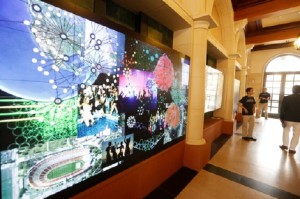 Christie is partnering with USC to provide students and faculty with access to the latest in visual technologies.

A gala reception was followed by an open house where attendees, comprised mostly of game and tech-industry executives, as well as faculty of SCA and friends of USC, could observe and interact with different programs and content being developed for new entertainment and educational projects.

Content for the 30 Christie MicroTiles was provided by USC School of Cinematic Arts.

The reception was also followed by a panel discussion on ‘The Future of Entertainment’, featuring George Lucas, Steven Spielberg and Don Mattrick of Microsoft, and moderated by Julia Boorstin of CNBC. The panelists discussed current technology shifts/trends with emerging media and outlined where they believe the entertainment industry is headed in the future.

The SCA Interactive Media Building will house programs that include the Interactive Media & Games Division, the Media Arts + Practice Bachelor’s and Doctoral Programs, and the Institute for Multimedia. It will also house leading edge R & D labs, such as Game Innovation, Mixed Reality, and Environmental Media Lab. The building features all of the most advanced digital technology including 4K digital projection, game testing rooms, and multitouch screens. 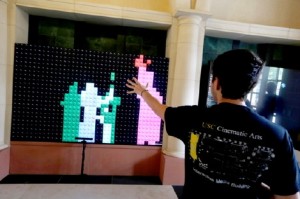 “At the USC School of Cinematic Arts we always want our students to have access to technologies that will improve their ability to tell exciting stories and the Christie MicroTiles solution literally allows them to expand their vision,” said Elizabeth M. Daley, the School’s Dean.

“This is the kind of technology that seamlessly supports the best narrative storytelling, and the visual displays are just stunning.”

“We’re delighted to support the School with our proven Christie MicroTiles solution, built on DLP technology, and used around the globe in many visual display applications,” said Jack Kline, president and CEO of Christie Digital Systems USA. “Christie MicroTiles are ideal for a wide range of demanding applications, including architectural elements, out-of-home advertising, command and control video walls, and event production, so we look forward to the content that the students will create to exploit the many features of our award-winning technology.”

Founded in collaboration with the Academy of Motion Picture Arts and Sciences in 1929 over 80 years ago, the USC School of Cinematic Arts has fueled and mirrored the growth of entertainment as an industry and an art form. The School offers comprehensive programs in directing, producing, writing, critical studies, animation and digital arts, production, and interactive media and games, all backed by a broad liberal arts education and taught by leading practitioners in each field. USC was voted the #1 game design school in North America for its graduate degree program by the Princeton Review for four consecutive years.

This entry was posted on Wednesday, July 10th, 2013 at 10:00 @458 and is filed under DailyDOOH Update. You can follow any responses to this entry through the RSS 2.0 feed. You can leave a response, or trackback from your own site.