Wanted: Winning Digital Signage Projects From All Over Europe

The Digital Signage Best Practice Awards are being presented at this year’s viscom düsseldorf for the seventh time. Companies from all over Europe have until 9th August 2013 to submit their completed projects. 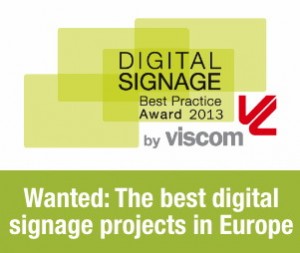 Five Categories to choose from

The market for digital signage solutions is constantly having to adapt as a result of ongoing developments. The award categories reflect this. The categories are based on the three main digital signage areas represented at viscom. The first of these, retail, is one of the main areas of application. Guiding systems represent the second category – guiding systems or wayfinding as we might call it is usually under represented in award categories and it’s likely that the DSBPA is one of the only award ceremonies that recognise this, Ed. And thirdly, information signage (POI) covers everything belonging to the traditional areas of digital signage such as display systems at airports or traffic display systems. In the last four years there has been a further category which focuses on interactive applications. This year is the second time for the Multichannel category, reflecting the increasing numbers of applications which make use of more than just one digital signage element. Here, digital signage is part of an overall multichannel strategy which can also include web or mobile applications, for instance.

Who can take part?

Any European involved in carrying out digital signage projects is entitled to enter – hardware providers, agencies, integrators – but also the clients who commission the project in the first place. At least 80 percent of the project being submitted must have been completed between 1 January 2012 and 31 July 2013.

The jury makes the difference

What makes the Digital Signage Best Practice Award special is the international jury. The jury reflects a real project team in terms of the different skills categories. These include an IT expert who knows all about hard and software. A juror with retail experience who knows what retailers are looking for. Shopfitting jurors who know how solutions have to be integrated to ensure they work properly and look good. There should also be someone who’s familiar with interaction design. And then there’s a press representative, to make sure that the media are involved. There is also one of the previous year’s winners onto the jury for greater transparency.

What benefits are there in taking part?

Besides getting companies to reflect carefully about what they’re doing, the awards are also very much about visibility. It’s quite an achievement to be nominated and to be one of the best three projects within your category – a fact which viscom will be publicise as widely as possible. The nomination also allows the nominees to present their idea to the 12,500 viscom visitors keen to get an overview of what is currently state-of-the-art in the field. Many digital signage visitors report that the awards presentations are an unmissable part of the exhibition. Previous years’ winners report that winning an Award boosts a company’s credibility levels – which can have a very favourable impact on business. All the previous winners have made active use of the Award in their marketing.

The winners will be announced at the Digital Signage Award Night on 07 November 2013. The ceremony will be held at the famous ‘the attic kö one‘ – located at one of the landmark department stores at the düsseldorf König Strasse. Cool club atmosphere, great networking and happy winners.

This entry was posted on Thursday, July 11th, 2013 at 00:01 @042 and is filed under DailyDOOH Update. You can follow any responses to this entry through the RSS 2.0 feed. You can leave a response, or trackback from your own site.